Life in the Fast Lane

When I started telling people about my idea to tour Britain in a milk float, one of the first things my friends (and anyone else I could find who was willing to listen) would say, was “why a milk float?”. Well, apart from the fact that at 10mph you can still overtake at least half the drivers in Norfolk, my main reply was “well, why not?!!”.

We live in a world driven by material goals, the need for speed, achievement, success (me included)...but what about doing something for the sake of it...for a good old fashioned adventure...dare I say it, just for the fun of it?

So I began looking into the practicalities of travelling by milk float. How far could they go in a day (about 30 miles!), how do you re-charge the batteries, would a milk float get me from Norfolk to the Highlands of Scotland? I spoke to the director of a dairy who’d done a road trip for charity in a milk float, and who told me in a slightly angst-ridden voice that “it would be a bloody miracle if I made it round in one piece.”

Not to be deterred, I posted on forums frequented by fellow milk float enthusiasts, and got several replies about amperes, voltages and DC to DC conversions, which I gratefully  acknowledged whilst feeling absolutely none the wiser (electronics definitely wasn’t my strong point at school!).

But then I found a company based in Oxfordshire who specialised in converting milk floats. I phoned them up and blurted out all my ideas about using solar panels and green energy, folding stages and off-grid usage, to which they replied resolutely ‘Yes, we can do all of that!’

At last – someone who understood me! 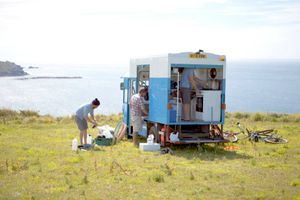 That was the good news. It wasn’t going to be cheap, however, to get a milk float on the road that would actually do the job. It would need a new set of batteries, and some special modifications so that I could use a normal plug socket to charge the vehicle, and with other modifications the bill would run into several thousand of pounds.

I seemed to overcome one hurdle only to find another, but like most things in life if you keep plodding along (at speeds of 10 mph or under) an answer will usually come your way. First, a musician friend who I had toured with in the past, and who sadly can no longer play due to suffering from Multiple Sclerosis, offered me £2,000 towards the purchase of the milk float.

Inspired by his generosity, I tried to think of other ways that I could raise the necessary funds. So I came up with the idea of a unique fund-raising campaign based around the milk float; selling advertising space on the vehicle to local businesses, offering a ride in the milk float for the day, doing a House Concert in someone’s garden, even cooking a candle-lit meal!

So that’s where I’m up to at the moment – the pledges page on my website has just gone live, and I’m hoping to raise the money I need for the milk float conversion by December 2014, which will give plenty of time for the guys at CBL in Oxfordshire to work their milk float magic.

I’m also hoping to use the tour proceeds to set up a community music project in Norfolk, which I’ll be writing about in a future blog instalment!